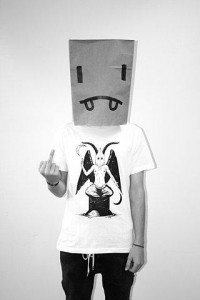 Scottish Tom Nelson was raised in the eighties and nineties by parents feeding him music like Earth, Wind & Fire, Chic, Yazoo and the Pet Shop Boys. So it only figures that these days, he rips apart ancient disco records on a daily basis. Not holding a grudge against his parents tough. As Go Go Bizkitt he pastes the pieces back together, creating some phat new French House.

When he was fifteen, his favourite homework was actually the album ‘Homework’ by Daft Punk. “Although the whole album was fantastic, i constantly played one track in particular that still inspires me to this day. That track was “Hi-Fidelity”. It somehow just sounded right.”

After the mid-nineties the whole Daft Punk-genre kinda disappeared from the scene, making room for mainly Trance music. Nelson also disappeared for a while, as he joined the army as an aircraft engineer. The job in the army gave him the opportunity to spin his disco records in Brazil, Thailand, Africa, Germany, Gibralter and the Falkland islands. After five years he returned to the UK, and so did the disco/funk genre he was fond of. “When I returned i found out that new artists had sprung up making things disco fresh again. I mean all this music was coming back! aarrrgghhh!!!… pleasure overload!”

Tom started Djing again, and received positive reactions. “I just have fun. Luckily there are about 1 million disco references and i enjoy digging around for fantastic samples….. then rip it to bits.” Here is one of his latest pieces, ‘Get Up’,

and a sample of his upcoming ‘My Love Is Free’.

At the bottom of the interview he added: “To all the people who enjoy & push “proper” French Touch…. much much love!!”